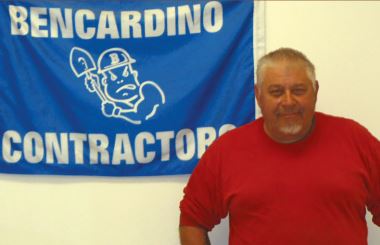 Ron Krajewski, Sr. has been with Bencardino Excavating for ten years and you may have seen him operating the milling machine or asphalt paver on the job. He is also on the Bencardino Safety Committee, which helps to organize trainings that keep Bencardino employees and others safe while working on the job site. In fact, Ron will play a key role in the groups upcoming workshop that will address the special hand signals that operators and laborers use to communicate while on different elevations.
Along with supporting the Safety Committee, Ron Sr. enjoys working alongside his son, Ron Jr. Previously, Ron owned a blacktop, asphalt and concrete business and at that time hired Ron Jr. as an employee. And now, years later, the two are back working together again  a fun experience that they both have grown to appreciate.
The guys at Bencardino Excavating are like a second family to me, said Ron. Recently, many of them came out to my oldest grandsons 6th birthday and we all had a great time. Thats not something that every company and its employees do. Ron clearly values the relationships he has built while working for Bencardino Excavating.
When hes not on the job, Ron loves spending time with his children and grandchildren. With six grandkids and one on the way, Ron has got his hands full. He jokes about life before the little ones came along, when his kids would invite him out for nice steak dinners on Friday nights. Now, when they call all they want is for him to babysit! He doesnt complain though, because he wouldnt change spending time with his kids and grandkids for the world.
In addition to spending time with his family, Ron loves working in his garden and around the house. He has close to ¾ of an acre of land at his Levittown home which he enjoys cultivating to make things grow.